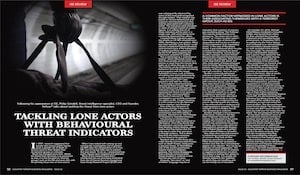 Following the presentation at The International Security Expo in London the following article was published in the magazine Counter Terror Business. pages 58-59.

The article discusses the differing indicators that lone actors and fixated people leak prior to an attack and how, when trained can be identified.

In 2007 research suggested that people who pursue public figures pose a greater risk of death or serious injury to their targets than do terrorist groups or criminals.

Much has changed since then. Whilst the threat from terrorism is as prominent as ever, it is less focused on ‘terrorist groups’ such as the IRA and even AQ with the primary focus now on lone actors.

One of the key elements is that such individuals don’t snap, they plan and prepare and often follow a process, referred to as ‘The Pathway of Targeted or Intended Violence’.