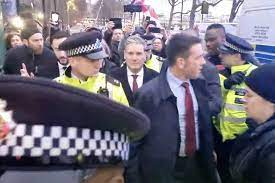 Was Sir Keir close to being killed?

The images of Sir Keir Starmer MP being surrounded in Westminster has caused a flurry of responses, most of which are a vast over-reaction. Various political correspondents and politicians has connected yesterday’s incident with the fatal attacks of Jo Cox M and more recently Sir David Amess MP. This is wrong, misleading, and dangerous!

The UK has a very strong policy of freedom of speech and the right to protest. Protest groups are particularly keen to demonstrate as close to Parliament as possible to maximise their perceived influence on MPs. This was especially prevalent during my time in Parliament, the Brexit years where we have demonstrations camped out outside the gates of Parliament and one individual repeatedly shouting down a loudhailer ‘Stop Brexit’.

Such was hostility at times, we advised MPs to either delay their exit, leave by a different exit or have a taxi come into Parliament to pick them up. However, despite that advice, we still saw the incident involved Anna Soubry being harassed and jostled by XRW protesters.

Yesterday’s incident was a reminder of the hostility directed at MPs, on this occasion ostensibly by a group termed as ‘Sovereign Citizens’, who include anti-vaxers and other who believe that the laws made by Government don’t apply to them.

The question is, were Sir Keir Starmer MP and David Lammy MP in real danger.

The simple answer is no. When we look at attacks on MPs over the past 22 years, including those with fatal consequences, they follow a pattern. This pattern fits with the wider research into attacks on public figures across the US and Western Europe.

Attacks on public figures are predatory targeted attacks. They are not random, affective and impulsive. Every MP who has been attacked has been targeted in their local constituency, by a local constituent usually over an ideological cause rather than any personal agenda.

In simple terms, if you are going to attack someone in the public eye, you will need to know where and when they are going to be in a specific location, and then have access to that location. You will need to have close proximity in order to attack. You cannot achieve that in a random event such as an MP walking around Westminster.

In light of this latest incident, we may see a return to MPs being advised about their safety when leaving the Parliamentary estate, increased use of taxis and better policing of demonstrations.