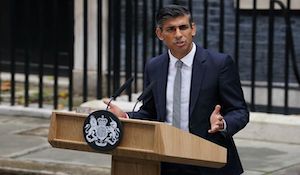 With the UK's new PM, the first person of colour to hold the post an escalation in threats from racists and XRW is inevitable.

There is no doubt that whilst many will be celebrating a person of colour rising to the position of Prime Minister, there will be some that for purely racial reasons will be furious.

The Far Right is often referred to as Fascists, Nazis and includes neo-fascism, neo-Nazism, the Third Position, the alt-right and white supremacists

Their hatred extends to antisemitism, homophobia, and the Left wing.

They have been responsible for the murder of one politician (Jo Cox MP) and the planned attack on another (Rosie Cooper MP).

The idea of having a person of colour as Prime Minister will provoke a response, albeit not directly targeted at him or his family as they will enjoy highly trained armed close and residential protection for life.

The XRW will direct their hatred at communities of colour, immigrants and those who promote or represent them. This will include business leaders and other media personalities who advocate greater inclusion.

Many of those who will be targeted will not have any form of protection and are unlikely to have access to threat management expertise that will identify communicated threats, and approaches of concern.

Threats and hostility may be communicated via social media, email, or other means, although there is unlikely to be any directly communicated threats, and herein lies the issue.

Those who seek to cause fear and intimidation make threats. Their purpose is instilling that sense of anxiety, fear, and division. They are likely to make such threats anonymously to avoid identification and prosecution. This anonymising of threats creates a further layer of fear, in that the recipient doesn’t know who has communicated the threat and so everyone becomes a suspect. The paranoia and hypervigilance sets in as their mental health deteriorates.

The threat of targeted violence from the XRW is genuine and they have precedence. The need for behavioural threat expertise to decipher the indicators of such threats will be important both the stop attacks, but also to ensure assets are properly utilised and ensure that business and life can continue as usual. Training and development has never been more important.